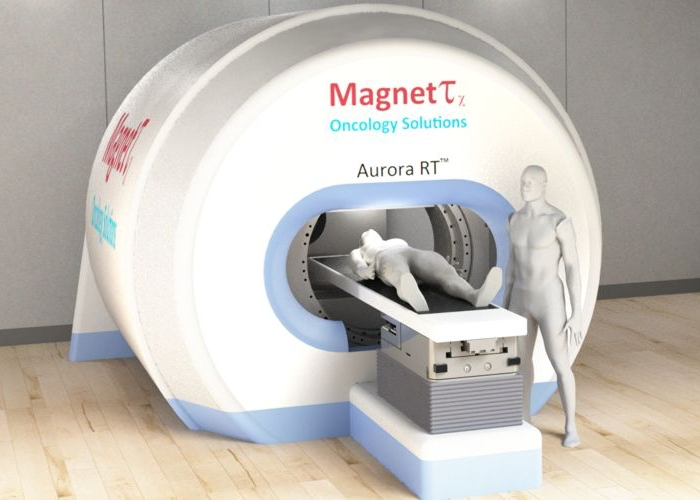 Closely-held MagnetTx Oncology Solutions filed a 510(k) application with the FDA in September for its Aurora RT device, which combines the accuracy of magnetic resonance imaging (MRI) with linear accelerator (linac) technology for radiation therapy required by cancer patients.

“We are the first to successfully merge linac, which provides the radiation beam, with MRI, which we believe represents the future of radiation therapy to treat any solid tumor,” Gino Fallone, co-founder and CEO, says in an interview with BioTuesdays. “Today, these machines must be 10 feet apart from each other.”

Some 50% of people in the developed world who contract cancer will be treated with radiation so Aurora RT “represents a tremendous opportunity to improve the quality of life for millions of people by increasing the accuracy of radiation and reducing the number of treatments,” he adds. “We believe Aurora RT also has the potential to be cost effective for hospitals.”

Aurora RT has been the subject of more than 60 scientific peer-reviewed articles, which Mr. Fallone says were required to receive research grants in the past. The technology is protected with more than 20 issued patents and others pending.

The company achieved proof-of-concept of linac in combination with MRI in 2008 and built its whole-body prototype in 2013-14, which was followed by optimizing Aurora RT’s design. “One of the features of our device is that the space for a patient is much larger than that of a typical MRI system,” he adds.

MagnetTx also is in the process of seeking to raise $50-million in several tranches from U.S. venture capital and institutional investors to carry the company to the installation of its potential first sale in 2020-21.* The order cycle takes one-to-two years complete installation, including hospital renovations.

Proceeds of the financing would be used to expand senior management, sales and marketing, technicians and installation engineers, and build a radiation-shielded vault for system testing in 2019. Mr. Fallone also figures the Aurora RT initially would sell for the combined price of a conventional radiotherapy linac and an MRI.

All cancers reside in soft tissue, which are best seen in MRI. “Imaging currently provided on a linac by an on-board CT (computed tomography) scan does not show contrast between soft tissues anyway close to what an MRI shows and, can only be performed before and after treatment,” Mr. Fallone points out.

This results in an error-margin on the position and the shape of the tumor, he contends. There is even greater error if the tumor moves, such as a lung tumor when the patient breathes. As a result, he says patients must have many treatment sessions with lowered doses at each session.

“With Aurora RT, we have combined MRI and linac so that continuous MRI imaging at say, four frames a second, can be performed to see a tumor and adjoining tissue during radiation delivery,” he adds. “Our solution is designed to improve clinical outcomes by irradiating less healthy tissue, leading to fewer side effects and lower heath care costs.”

Fueled by demand in China and a growing need in developing markets, he cites a 2015 study in The Lancet Oncology, which claimed that more than 20,000 new linacs would be needed by 2035.

There are two competing combination linac and MRI scanners on the market: Elekta and ViewRay. “We have several major clinical advantages,” Mr. Fallone claims, noting that Aurora RT has the potential to treat tumors irrespective of where they are in the body.

“Our very large patient opening, which measures 110 cm by 60 cm, allows us to move the patient couch significantly in a lateral direction so that the tumor will always be in the iso-center of the radiation beam no matter where the tumor is.” As a result, he says Aurora RT has the potential to treat peripheral tumors optimally and perform standard whole breast treatments.

According to Mr. Fallone, conventional MRIs are too large to be installed through the door of the examination room and usually require removal of a wall or ceiling. Conventional MRIs also require liquid cryogens, such as helium to operate. Since liquid cryogens can instantly convert to gas for system failures, emergency venting is required to release the gas out of the building to avoid any danger to a patient and staff.

For MRIs within treatment bunkers, this results in a large vent opening through six-to-seven feet thick concrete to travel out of the building, requiring additional radiation-shielding to prevent radiation escaping to adjoining space, he adds.

Mr. Fallone notes that Aurora RT can be installed in standard treatment rooms using conventional methods through the door of the room. Aurora RT also uses a high-temperature superconducting MRI, which does not require liquid cryogens. “So we have no need for helium venting.”

And while turning conventional MRIs off/on must be performed by the vendor with special equipment and through a long process, he points out that this operation for Aurora-RT can be performed by an off/on switch in a very short time for servicing the equipment or removing metallic items that may have been accidentally drawn to the MRI from a patient or staff.

To connect with MagnetTx, or any of the other companies featured on BioTuesdays, send us an email at editor@biotuesdays.com.