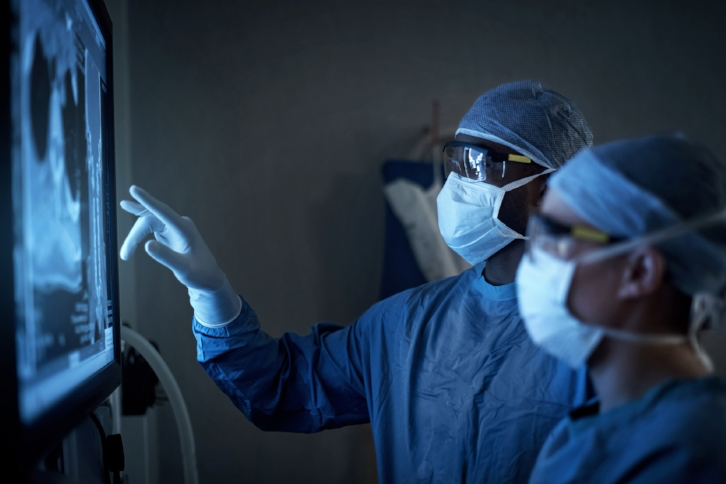 “OTIS is a micron resolution imaging device that provides real-time visualization of tissue microstructures of excised tissue specimens for surgery, pathology and radiology,” he adds.

Dr. Carignan explains that Perimeter’s technology is designed to image tissue specimens in real time after they have been removed from the body. “We’ve taken OCT technology and adapted it to quickly image very large surface areas of removed tissue. Think of it as a photocopier in that the tissue is placed on an imaging window and then scanned. With higher resolution than other scanning modalities, we can provide more detail at the time of a procedure to potentially obtain better clinical outcomes.”

Many surgical procedures rely on post-operative pathology information to avoid re-operating to remove additional tissue. Dr. Carignan points to one of Perimeter’s initial markets in breast cancer, where the breast lumpectomy market is plagued by 25% reoperation rates or higher.

“The surgical objective is to remove the tumor plus a healthy layer of surrounding normal tissue, normally several millimeters, as a proxy that no cancerous cells are left behind,” he adds. “Our solution has the potential to accurately assess microscopic disease during surgery to allow less tissue to be removed and minimizing changes to the cosmetic appearance of the breast.”

There are an estimated 760,000 lumpectomies performed worldwide annually. A study conducted by MD Anderson suggests there is a $16,000 cost increase for each lumpectomy reoperation, with a 49% increase in complication rates.

Perimeter’s platform device already has received 510(k) clearance from the FDA. Later this year, the company plans to submit its commercial device for FDA clearance, with an application for European approval in 2019.

The OTIS platform consists of four key components: a wide-field OCT imaging device; a single use consumable imaging window, which Dr. Carignan says represents a key revenue stream for the company; OTIS’ database of some one million breast tissue images and training programs; and machine learning image algorithms based its library of tissue structures.

While the Perimeter’s current focus is intra-operative tissue imaging, Dr. Carignan says that with the addition of biopsy/radiology and pathology, the company’s addressable market is at least $1.8-billion in the U.S., Canada, Europe, Japan, Australia and New Zealand, but excluding China.

Dr. Carignan, who moved into the executive suite at Perimeter at the beginning of June, has more than 20 years of experience in key leadership positions, spanning the medical imaging, women’s health, surgery and rehabilitation sectors. He says 25% of the Perimeter team worked together on previous breast imaging start ups.

“The OTIS optical tissue imaging system is poised to make a major impact on the tissue specimen imaging market,” he contends. “The team has done an incredible job developing OTIS and established strong clinical and strategic relationships that will be the basis for widespread adoption.”

Perimeter and Mount Sinai currently are completing a study of the OTIS imaging system in head and neck cancer.

In an earlier 50-patient study presented at the American Society of Breast Surgeons in 2018, the company’s wide-field OCT demonstrated a 96% concordance with gold standard pathology.

And in a study of Perimeter’s screening programs, seven clinicians with limited training and without pre-operative information achieved 81% sensitivity and 89% specificity to assess post-lumpectomy breast tissue margins. “This gives us a great deal of comfort to commercialize our technology,” Dr. Carignan suggests.

The only margin assessment device currently on the market – Dune Medical’s Margin Probe – is a radio-frequency spectroscopy. “While we generate an image of a scan, Margin Probe is more of a sampling technique,” Dr. Carignan says, adding that Margin Probe has a much lower specificity than OTIS, is costly and has challenges assessing microscopic disease.

He also points out that there are florescence, MRI and probe-based optical imaging devices currently in development but these have not overcome high costs, low specificity and challenges assessing microscopic disease.

Dr. Carignan says Perimeter is planning a regional approach to commercialization, following regulatory approvals, targeting a broad range of tissue specimens including breast. The plan is to do a limited launch in the U.S. in late 2019 with a clinically focused direct sales team and channel partners to increase market coverage.

In 2020, the company expects to expand sales and marketing to Canada and the EU, using international distribution partners, followed by the rest of the world in 2021, with a specific focus on Australia, New Zealand and Japan, using qualified distributors.

Perimeter also hopes to raise up to $25-million USD, with funds earmarked to develop its next generation AI product, additional clinical studies and regulatory clearances, and building out its commercial infrastructure.

“We believe OTIS is a disruptive medical device platform that can save time and money for healthcare providers and fit easily into the clinical workflow,” Dr. Carignan says.

To connect with Perimeter, or any of the other companies featured on BioTuesdays, send us an email at editor@biotuesdays.com.