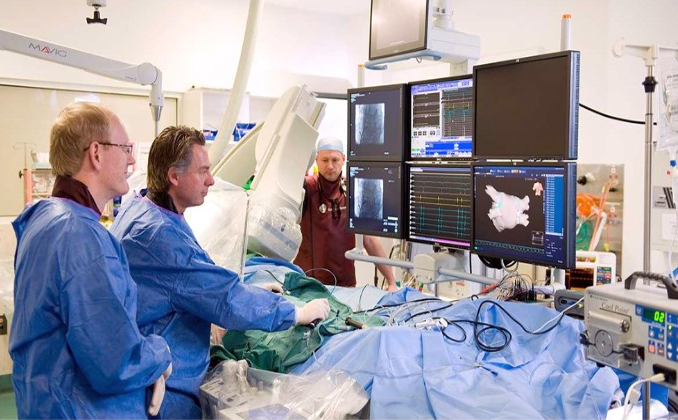 With the FDA’s 510(k) clearance of its PURE EP System in August 2018 and first successful patient cases, BioSig (NASDAQ:BSGM) is advancing its vision to improve medicine through biomedical signal processing.

“Our larger focus is on bioelectronic medicine, a new field of healthcare, which uses biomedical signals to develop new tools to help treat challenging diseases, such as heart conditions, hypertension, diabetes and chronic pain,” Kenneth Londoner, founder, chairman and CEO, says in an interview with BioTuesdays.

“PURE EP aims to minimize the effect noise and other electrical interference in the electrophysiology (EP) lab has on cardiac procedures. The system creates high-fidelity cardiac signals, which may provide better data to a physician, potentially improving the accuracy and efficacy of catheter ablation procedures used to treat arrhythmia, atrial fibrillation and ventricular tachycardia,” he adds.

“By improving signal clarity and reducing noise, this may allow surgeons to work more quickly and accurately, reducing the need for repeat procedures and providing a better option for patients, physicians and insurers.”

Mr. Londoner explains that PURE EP consists of both hardware and software platforms. BioSig’s hardware amplifies and converts a patient’s electrocardiogram (ECG) data into a digital signal for further processing by the company’s software, which “displays signals that can be undetectable in existing systems,” he contends.

These high fidelity, real time recordings might provide physicians performing cardiac ablations with higher clarity graphic displays of the electrical functioning of the heart. “This is not a trivial task,” Mr. Londoner says, adding that BioSig engineers spent more than seven years developing the technology.

The medical literature for years has documented suboptimal outcomes of current cardiac ablation procedures that could be enhanced with increased ECG clarity. Mr. Londoner says the FDA head for EP in 2017 called for “technical innovations in catheter ablation to improve the safety, effectiveness and procedural efficiency” when physicians remodel the heart’s electrical conduction system.

BioSig’s current Class 2 approval as a medical device allows the company to make only technical claims about PURE EP. “We make no clinical claims at this point because we are essentially a computer system that does not enter the body and we are in the process of generating clinical data,” he adds. “However, our system was designed by doctors, for doctors.”

The PURE EP System is indicated as a computerized system intended for acquiring, digitizing, amplifying, filtering, measuring and calculating, displaying, recording and storing of electrocardiographic and intracardiac signals for patients undergoing EP procedures in an EP laboratory. The system is used by licensed healthcare practitioners who are responsible for interpreting the data.

In February 2019, BioSig successfully conducted first patient cases at the Texas Cardiac Arrhythmia Institute (TCAI) in Austin, where the PURE EP concept was developed in 2011. TCAI is widely recognized as one of the leading research, training and treatment facilities in the country, which is dedicated to heart rhythm disorders.

“With the use of the PURE EP System, I was able to identify cardiac signals that were previously undetectable to me,” Dr. Andrea Natale, Executive Medical Director of TCAI, said in a statement. “I believe that the PURE EP System could change diagnostic and treatment strategies of arrhythmias, leading to more successful outcomes.”

Some five million people in the U.S. have atrial fibrillation, which leads to 750,000 hospitalizations each year and can greatly increase the risk of stroke. The estimated annual health care costs per atrial fibrillation patient are $15,000-to-$25,000. Ventricular tachycardia is more rare, but is responsible for some 300,000 sudden cardiac deaths a year in the U.S. Individuals with ventricular tachycardia almost always have symptoms of heart failure.

“One of the reasons we started BioSig was to make a difference in atrial fibrillation,” Mr. Londoner says.

Additional clinical cases are scheduled to take place at Mayo Clinic, which has conducted around 15 preclinical studies of PURE EP since 2014. In 2017, BioSig and Mayo Clinic began collaborating under a 10-year accord that, among other things, could lead to developing advanced clinical features of PURE EP and explore additional applications of BioSig’s technology outside of electrophysiology.

A Mayo Clinic peer-reviewed article in the Journal of Innovation and Cardiac Rhythm Management in 2017 suggested that with BioSig’s expanded capabilities, Mayo could potentially map neuron signaling throughout the body and potentially diagnose and develop new therapies for a range of diseases in neurology and ophthalmology.

Earlier this year, BioSig hired John Kowalski as VP of sales to lead market launch efforts of PURE EP. “We are planning to introduce our system into several centers of excellence, and continue our commercial expansion in 2020,” Mr. Londoner says.

The company also plans to build a commercial team of educators, system trainers and clinical support staff in 2019 and expects to record initial revenues by the end of 2019. BioSig also expects to submit a European CE Mark application later in 2019 and plans to establish its own European sales and marketing teams for PURE EP, he adds.

According to Mr. Londoner, a key objective for 2020 is publishing clinical study results to drive further adoption of PURE EP in the U.S. and internationally.

“PURE EP works in parallel with other lab systems and does not compete head-to-head with big medical device makers,” he points out. “Heart rhythm disturbances are debilitating conditions, which significantly increase risks of many other serious diseases, and we are hoping to play our part in improving an overall clinical experience in the lab, which will hopefully lead to better outcomes for patients.”

To connect with BioSig, or any of the other companies featured on BioTuesdays, send us an email at editor@biotuesdays.com.