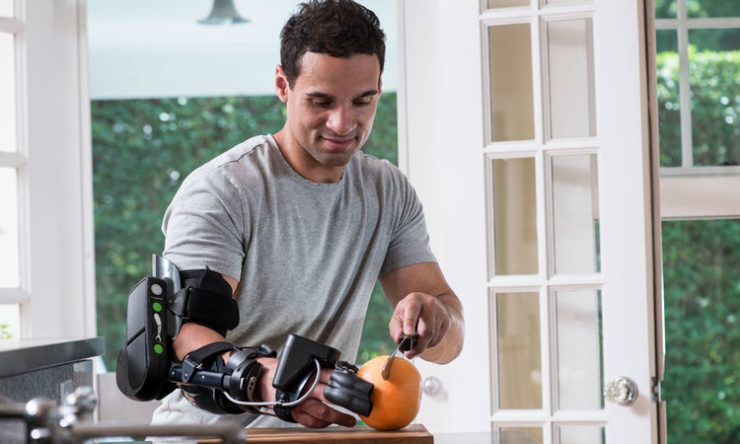 Myomo (NYSE American:MYO) is moving from a controlled introduction over the past few years to a scale up sales and distribution of its MyoPro product line of lightweight, non-invasive, powered arm braces to restore function in paralyzed or weakened arms.

“This is the reason we went public last year and raised about $20-million for sales and marketing, and expansion of the business,” Paul Gudonis, chairman and CEO, says in an interview with BioTuesdays.

“Our mission is to conquer paralysis with our patented myoelectric technology and show that the conventional wisdom of upper limb paralysis, where an arm hangs limp or is in a sling, doesn’t apply any more,” he adds.

According to Mr. Gudonis, MyoPro is the only commercially available upper limb medical device, with the largest home user base in the wearable robotics market, including more than 700 devices shipped.

“It is the only device that, sensing a patient’s own neurological signals through non-invasive sensors on the arm, can restore their ability to use their arms and hands so that they can return to work, live independently and reduce their cost of care,” he explains.

Mr. Gudonis says MyoPro also is supported by a growing body of clinical evidence, including academic studies about home use, safety and efficacy, functional benefits, and studies with victims of stroke, brachial plexus injury and traumatic brain injury.

Myomo was spun out of MIT in 2006 and after receiving FDA approval in 2007. It then set out on a controlled release of the MyoPro device, adding wrist and grasp components to the elbow only device, and working with the VA and leading institutes, such as Cleveland Clinic and Mayo Clinic.

The company went public in 2017 and began to scale up its commercial focus. “Our four pillars to grow revenue include sales and marketing, product development, clinical studies and reimbursement and international expansion all designed to broaden adoption around the world and establish MyoPro as the standard of care for upper limb paralysis,” Mr. Gudonis contends.

The strategy seems to be working. Revenue for 2017 rose 41% to $1.6-million from $1.1-million a year earlier. The company also continued the roll out of its MyoPro Centers of Excellence at orthotics and prosthetics (O&P) practice organizations, reaching 36 U.S. locations offering the MyoPro line of powered orthosis at the end of 2017.

The company also plans to roll out a miniaturized and lighter weight MyoPro for younger children. According to Mr. Gudonis, there are 150,000 children under the age of 18 in the U.S. with some form of upper limb paralysis.

Overall, there are some three million cases of upper limb paralysis in the U.S., with more than one million new cases a year caused by stroke, brachial plexus injury, spinal cord injury, multiple sclerosis, traumatic brain injury and ALS.

Myomo’s business model involves outsourcing manufacturing of the robotic components and fabrication while it focuses on sales and distribution to VA hospitals and O&P clinics. Ottobock, a global prosthetics group, distributes MyoPro in Germany, Canada and certain regions of the U.S.

Mr. Gudonis says Myomo is expanding its direct sales force to 10 regional managers from three this year. “Our goal is to be in the top 50 markets by the end of 2018, with reasonable access to 90% of the U.S. population.”

Last month, analyst Scott Henry of Roth initiated coverage of Myomo, saying the impetus for his “buy” rating is a belief that the company has a favorable opportunity to capitalize on its position as the first company commercializing a myoelectrically-powered orthotic solution for upper extremity partial paralysis.

The VA, private insurers and worker’s compensation on a case-by-case basis are currently reimbursing O&P clinics in ranges from $20,000 to $50,000, depending on the MyoPro model. The company recently applied to CMS for a Healthcare Common Procedure Coding System code to expand coverage to patients who are covered by Medicare and motivate additional O&P clinics to offer the device.

“We have a reimbursement team that works with patients and O&P clinics because like any prosthetic, MyoPro is a medical necessity designed to restore function in one or both limbs,” Mr. Gudonis says. “We’ve had patients avoid amputations, reduce pain medication and therapy sessions because they are able to use our device at home and at work.”

To connect with Myomo, or any of the other companies featured on BioTuesdays, send us an email at editor@biotuesdays.com.