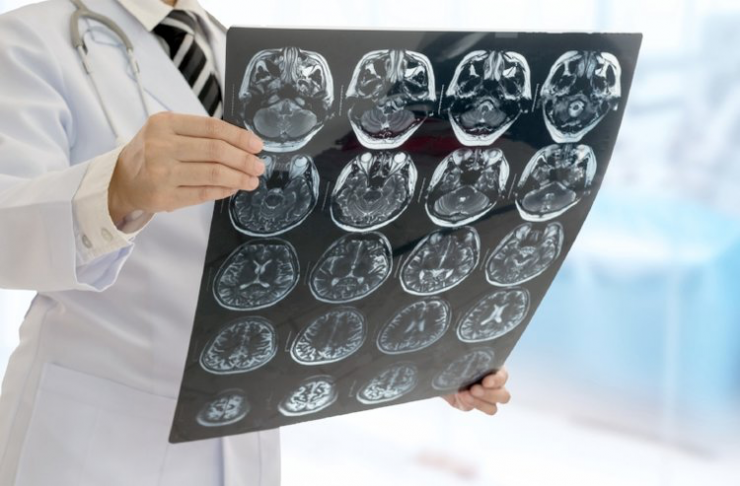 Diffusion Pharmaceuticals (NASDAQ:DFFN) expects to begin before the end of 2017 a pivotal clinical trial with its trans sodium crocetinate (TSC) lead compound to re-oxygenate oxygen-deprived tissue in patients with inoperable glioblastoma (GBM) brain cancer prior to conventional radiation and chemotherapy.

“In our Phase 2 study, we observed a 37% increase in overall survival at two years, but in a subset of patients with inoperable GBM, survival rose fourfold at two years,” David Kalergis, chairman, CEO and co-founder, says in an interview with BioTuesdays. “This highly responsive subset will be the focus of our Phase 3 trial.”

The Phase 2 study, which enrolled 59 newly diagnosed GBM patients, also demonstrated a clean safety profile and tumor regression, with 11 patients having undetectable tumors. There were no serious adverse events attributed to TSC and no negative effects on quality of life. Results of the study were published in the Journal of Neurosurgery in February 2017.

Mr. Kalergis explains that an insufficient oxygen supply, or hypoxia, to a region of the body causes major clinical problems in many life-threatening diseases. “Hypoxia is an especially critical obstacle in the treatment of cardiovascular and respiratory diseases, as well as in cancer.”

In cancer, he points out that hypoxia, which occurs when the cancer outgrows its blood supply, can lead to aggressive tumor characteristics, such as increased angiogenesis, metastatic potential and resistance to treatment with radiation and chemotherapy.

“Our TSC re-oxygenates hypoxic tissue systemically in many disease settings, including cancerous tissue,” he contends. The company has orphan drug designation from the FDA in multiple indications, including GBM.

GBM is the deadliest form of brain cancer, with an average life expectancy post-diagnosis of less than two years. In the U.S. alone, approximately 18,000 people are diagnosed with GBM every year.

Diffusion also is developing TSC as potential treatments for metastatic brain cancer and metastatic pancreatic cancer. Beyond oncology, the company’s other hypoxia-related indications, which are supported by preclinical and clinical data, include:

TSC was developed at University of Virginia by Prof John Gainer, Diffusion’s co-founder, under a grant from U.S. Office of Naval Research as an emergency treatment for battlefield casualties suffering life-threatening hypoxia from blood-loss.

“We transitioned to oncology as a first focus, based on promising preclinical, and human safety and efficacy data,” Mr. Kalergis points out.

“We have validated the mechanism of action through computer simulation studies, in vitro studies and direct oxygen measurement in tissue,” he adds. “TSC has been studied in three Phase 1 or 2 studies and has demonstrated a favorable safety profile, clinical efficacy and optimal dosing regimens. We are Phase 3 ready.”

According to Mr. Kalergis, inoperable GBM patients are currently excluded from major clinical trials, highlighting the unmet need and making these patients available for the TSC Phase 3 trial.

Based on an end-of-Phase 2 meeting with the FDA, a single Phase 3 study, if successful, could serve as a basis for regulatory approval, he adds. The company expects to enroll 230 newly diagnosed inoperable GBM patients, randomized 1-to-1 into TSC treatment and control groups.

The primary endpoint of the trial is overall survival; secondary endpoints are tumor status, performance and quality of life. Mr. Kalergis figures the Phase 3 trial will take 3 ½ years to complete.

Diffusion also has orphan drug designation for TSC as a treatment for metastatic brain cancer, which also is highly hypoxic and causes significant resistance to the current standard of care, which is radiation treatment.

In a rat study of metastatic brain cancer, Mr. Kalergis says radiation plus TSC resulted in a 73% survival rate at 60 days, with complete tumor remission in TSC survivors, based on MRI. That compared with 28% survival at 60 days in a radiation-only treatment group, also based on MRI.

In pancreatic cancer, another very hypoxic cancer, he says various animal studies have shown TSC to be a significant enhancer of standard-of-care chemotherapies: gemcitabine and paclitaxel.

“We have protocols completed for these two cancer indications but have not submitted them to the FDA because we are focusing our resources on the Phase 3 GBM trial,” he adds. “As a result, we are looking for partnerships or out-licensing the metastatic brain and pancreatic indications.”

Having proven safety from the company’s oncology studies would allow the company to begin additional Phase 2 studies for other hypoxia-driven indications beyond oncology, “assuming partnerships or other funding,” he contends.

In stroke, for example, hypoxia drives the destruction of neurons in the brain, leading to impairment and death.

Mr. Kalergis notes that the company has obtained statistically significantly safety and efficacy results in animal studies with TSC alone and in combination with tPA, a clot buster that is the standard of care in both ischemic and hemorrhagic stoke, respectively.

“We’re working with key opinion leaders on a stroke clinical trial design, but here again we’re looking for some sort of partnership,” he adds.